The Marines move with quickness and agility through the old, abandoned building in Beirut. It is not long before the Devil Dogs encounter resistance from enemy forces. The battle is fierce, but is over in mere moments, with the Marines emerging victorious. These Marines, however, never really fought this battle. The Leathernecks are virtual representations of Marines placed in a video game.

“Close Combat: First to Fight,” created by Destineer Studios, in association with Headquarters, Marine Corps, the 1st Marine Division and Atomic Games, is a new training tool to help Marines learn about combat, and show civilians the type of work Marine infantrymen do during combat missions.

“First to Fight” will be used as a learning tool to teach Marines about close combat in urban terrain. The player leads a four-man fire team in close quarters urban combat in the streets of Beirut. The game incorporates many doctrines that are currently in use by infantry units deployed around the world. More than 40 active-duty U.S. Marines, ranking from privates to colonels, who recently returned from frontline fighting in the Middle East assisted in the creation of the game, according the game’s official website.

The game employs the Marine Corps doctrine of “Ready-Team-Fire-Assist” to provide players with all-around team security during game play. The same doctrine is used in Middle Eastern conflicts. Players call in for support from snipers, air strikes, mortar fire and more as if they were part of a Marine Air Ground Task Force (MAGTF), according to the site. 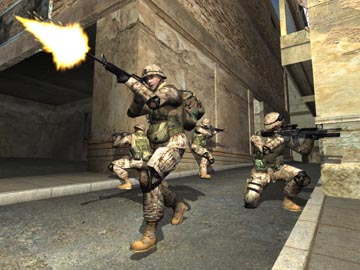 Realistic images, faces and bodies of Marines were mapped into the game to give it a more realistic feel, Sharp said.

Currently, videos and images are available to the public at www.firsttofight.com. Marines who have seen the game trailer commented on the game.

“This shows what Marines are really going through,” said LCpl. Carlos Rivero, a file and directives clerk, “It’s very realistic.”

“The graphics and battle scheme are top-notch,” said LCpl. Josh Rowe, a physical security clerk, “It’s good that the developers are using real Marine Corps strategies in the game.”

“We’ve been trying to make this game authentic to the Marine Corps,” said Steven Charbonneau, public relations and community manager for Destineer Studios, “We’re trying to give people a sense of what Marines go through in a combat environment. It also gives non-infantry Marines a chance to be a fire team leader for a while.”

The game developers applied the “psychology model” concept to give the game a sense of realism. Players’ characters have a will of their own and are affected by the other players’ tactics. The psychology model was also applied to the enemies in the game. Players’ tactics could be used to scare their opponents, deplete enemy will to fight or cause the enemy to make a mistake, said Charbonneau.

“The human will is an essential force that governs all action in war fighting,” said Peter Tamte, president of Destineer Studios. He explained that human will is a driving force for a combatant, and should thus be put into this game to give it a sense of realism.