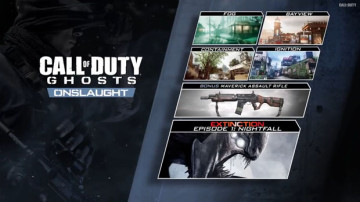 New multiplayer maps in Onslaught include:

Onslaught arms players with the Maverick, a deadly new, dual-purpose addition to their multiplayer arsenal. Outfitted with a lightweight wood stock and a digital screen display, players can choose to use the Maverick as either an Assault Rifle or Sniper Rifle, depending on their tactical needs.

Anchoring Onslaught is “Episode 1: Nightfall,” the first installment in Extinction’s new, four-part episodic narrative. As the initial foray into this single, connected story that will be told across each DLC Pack launch throughout the year, “Episode 1: Nightfall” takes fans to a remote research facility hidden deep within the Alaskan wilderness, where a small recon team must infiltrate the facility to find out what happened to the mysterious Nightfall Program. This expanded Extinction storyline introduces new characters, plus two all-new alien species, and debuts an exclusive Venom-X weapon that pulverizes the Cryptids, as players delve deeper into the story of what happened following mankind’s first contact with the Cryptids in Colorado.

Fans can purchase Onslaught as either a standalone DLC Pack for a suggested retail price of $14.99, or purchase the Call of Duty: Ghosts DLC Season Pass.  Season Pass holders not only get all four epic DLC Packs** for the discounted suggested retail price of $49.99*, but they also get instant access to the downloadable multiplayer map, “Free Fall,” as well as the Team Leader Digital Pack, which comes with a unique multiplayer character head, weapon camo, reticle, player patch, player card and player background.

Call of Duty: Ghosts game sold separately and is required to play this Map Pack.