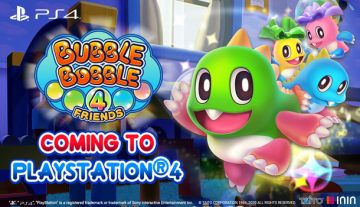 ININ Games and Taito are pleased to announce that after the successful worldwide release of Bubble Bobble 4 Friends for Nintendo Switch, the game will be arriving on Sony PlayStation®4 at the end of 2020 as a physical release and as a digital download in the PlayStation Store in America, Europe and Australia.

The PlayStation®4 version will be released as “Bubble Bobble 4 Friends“(tentative name) and will be greatly expanded with exciting new content (new stages and game modes), which will also be made available for the Nintendo Switch version, that is currently on sale. Already well-received around the world on Nintendo Switch, PlayStation 4 gamers can experience the excitement of Bub and Bob later in the year. Also, the much-requested fan favorite villain Baron von Blubba will finally make its return.

To celebrate the upcoming release of the PlayStation®4 version, Taito and ININ Games are holding a fan art contest that is open to all Bubble Bobble fans! Gamers with artistic and creative skills, young and old, may enter the contest by following the entry guidelines and posting their artwork of the “Bubble Bobble” series on Twitter on the official Taito account @TaitoCorp in English (https://twitter.com/taitocorp)! The winners will be shown in the game credits with their fan art and a nickname.

Submit your creative artwork of Bubble Bobble before the application deadline of May 31st 2020 (Japan time). There will be 10 winners chosen after the contest ends.

Bubble Bobble – Nothing but the BEST!

Bubble Bobble 4 Friends is a single-screen platform action game released as a completely new addition to the legendary Bubble Bobble series, in which you control the Bubble Blowing Dragons Bub and Bob to clear stages. The aim is to clear stages by shooting bubbles, trapping enemies, and breaking bubbles. Also, players can acquire special skills by collecting letter bubbles that form the word “extend”. You can play together in multiplayer with up to four players. Also included is the original arcade version of Bubble Bobble. A celebration for fans and fun for the whole family!