Bridge Constructor Portal Coming to Retail with 3-in-1 Package 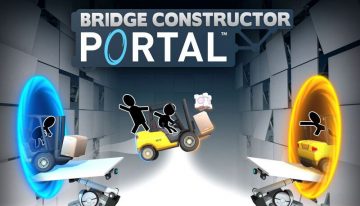 Bridge Constructor Portal approaches the world of Aperture Science testing from a completely original angle, bringing the player in as a new employee tasked with building bridges, ramps, slides and other constructions to get the Bendies safely across the finish line in their vehicles. To solve the 60 test chambers, players must make use of gadgets including portals, propulsion gel, and aerial faith plates to bypass dangers such as sentry turrets, acid pools and laser barriers – all under the watchful eye and scathing wit of GLaDOS.

“We love seeing the highly creative and unique approaches players take in the Bridge Constructor series,” said Gregor Ebert, PR Manager of Headup Games. “You can really innovate and create your own victory path in each of these games, so we’re excited to share each of these challenging experiences in a single bundle.”

Developed by ClockStone Software and Headup Games and distributed by Nighthawk Interactive at retail, the Bridge Constructor Portal package will be available at participating PlayStation®4 system and Xbox One retailers in late Summer 2018, for $29.99. All three games are rated E for Everyone, with warnings for Mild Fantasy Violence.

Borderlands 3 Out Now on Steam, Featuring Innovative PC Cross-Play Functionality
Be the first to comment!
Leave a reply »