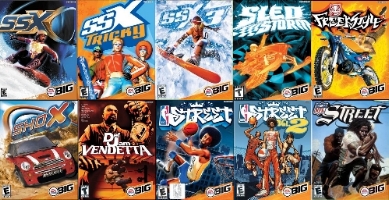 Despite all the hype that surrounded the launch of the PS2, the system’s initial software lineup wouldn’t have been as appealing without the support of EA Sports’ titles, specifically Madden NFL 2001 and SSX. Madden NFL 2001 was an absolute must-have game for football fans, while SSX proved to be one of the PS2’s first true killer apps. SSX also helped usher in EA Sports Big, which is still going strong today and has provided a variety of over-the-top gaming experiences. From frenetic snowboarding to flashy streetball, the Big brand has injected life into traditional and alternative sports games. In honor of NFL Street, the latest entry in the Big line, Game Chronicles rounds up the games under the EA Sports Big banner and evaluates their success. 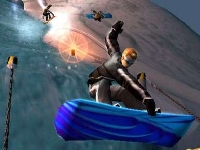 Creating a favorable first impression is crucial in establishing a new gaming brand, and with SSX (short for Snowboard Supercross), EA Sports Big did just that. Like most snowboarding games before it, SSX focused on racing, but it had two things separating it from the pack: style and intensity. The game was a great showpiece for the PS2’s graphics capabilities, and its stylish presentation – complete with cool menus, a hip announcer, and dynamic music – set the standard for subsequent Big releases. But it’s how the game played that truly set it apart from previous snowboarding games. The gameplay was fast and fluid, tricks were easy to pull off, and a turbo-boost element and Road Rash-like fighting component gave the game plenty of edge. Much of the action occurred on twisty, chimerical courses filled with jumps, rails, and shortcuts. Ultimately, even those uninterested in snowboarding found SSX hard to resist. 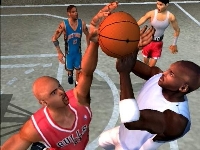 NBA Jam may have ruled the ’90s, but NBA Street instantly became the arcade-style basketball game of choice in the new millennium. Overflowing with flair, the game captured the essence of streetball while applying its own blend of attitude. Turbo boosts and trick moves let you take the ball to the hoop with quickness and style, helping to fill the all-important Gamebreaker meter in the process. Once the meter was full, you could fire off a dramatic, deadly accurate shot that had the potential to tip the score in your favor. Real and fictitious athletes graced the game, and a few characters from other EA Sports Big titles (namely, SSX and Sled Storm) made surprise cameos. 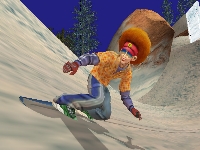 Originally intended as a simple expansion disc, the follow-up to SSX eventually blossomed into a full-blown sequel, featuring new characters, courses, and tricks. SSX Tricky also featured an innovative rival system, whereby your actions during gameplay affected your relationships with other characters. The PS2 version even contained DTS surround sound, a major achievement at the time. Run-DMC’s “It’s Tricky” was the game’s theme song, with samples from it supplementing the Uber trick system. In short, Uber tricks were the most crazy, risky, and high-scoring maneuvers in the game, and they helped distinguish Tricky from its predecessor. 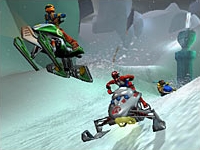 While not a total dud, Sled Storm has been the only glaring misstep of the Big line thus far. It originated as a sequel to the PSOne Sled Storm but ended up going the SSX route instead (hence the absence of a “2” from the title), much to the chagrin of veteran Sled Storm fans. That perhaps led to its undoing, since the SSX formula did not translate very well, nor was the game particularly deep or fun to play. Tricks were limited, control was slippery, courses were haphazard, and the AI was plagued by serious rubber-banding issues. Not even the smooth, colorful graphics and fantastic DTS surround sound could save it from the eventual bargain bin. 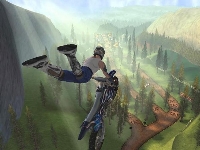 Fortunately for motocross fans, Freekstyle turned out much better than Sled Storm did, despite suffering from a couple of the same problems. As with Sled Storm, rubber banding became an issue with the AI, but the game was fast and exciting enough to keep you playing. It also controlled well and borrowed the trick system from the SSX games, making it instantly accessible to many gamers. The riders consisted of real and fictional motocross stars, courses offered an assortment of thrills and challenges, and tricks were both realistic and outrageous. Turbo boosts and “freekout” stunts kept Freekstyle close to its SSX roots, which should explain why it was quickly labeled as “SSX on dirt” by the gaming press. 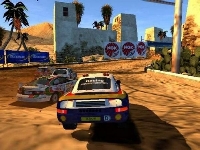 What’s interesting about Shox is how quickly it vanished from the gaming scene and landed in bargain bins. Mind you, it wasn’t a bad game – the gameplay and graphics were pleasing – but the concept of high-octane rally racing just didn’t appeal to many American PS2 owners, partly because there were several great “traditional” racers already grabbing their attention. Nevertheless, the game featured 24 licensed cars, ranging from a Mini Cooper to a Ford Escort RS200, and contained a similar number of multi-regional tracks. Controls were tight and intuitive, with gameplay that encouraged you to drive furiously to earn cash and medals. A slick presentation, clever gimmicks (“Shox Zones” and “Shox Waves”), and impressive special effects topped it all off. 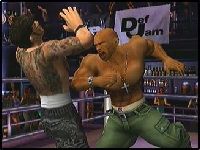 Hip-hop and wrestling may have seemed like an awkward combination, but Def Jam Vendetta managed to make it work. While Vendetta was not the first game to revolve around hip-hop artists – the Wu-Tang Clan actually had its own PlayStation game back in 1999 – it has been the most successful pairing to date. Developer AKI, best known for its work on various wrestling games, furnished Vendetta with a strong gameplay engine, and the Def Jam license supplied famous rappers (DMX, Method Man, Redman, and Ludacris, among others), infectious beats, and ring announcing by Funkmaster Flex. The well-crafted Story mode added drama to the grappling, while seedy venues and wicked signature moves made for memorable matches. 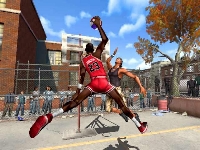 Although it was not a complete overhaul of the original Street, Vol. 2 featured several noteworthy enhancements. Reworked graphics and new moves/animations, like passing the ball off the backboard or an opponent’s head, imbued the sequel with much flavor. Meanwhile, Level 2 Gamebreakers made things even more frenzied, and you could “pocket” a Gamebreaker to save for later. Dozens of NBA legends joined the roster, such as Larry Bird and Wilt Chamberlain, accompanied by returning players and characters. Additionally, real-life DJ Bobbito Garcia served up witty and authentic streetball commentary, replacing the annoying Joe “The Show” from the first game. 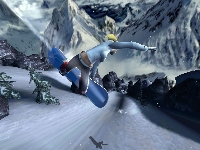 After a two-year break, the SSX series returned triumphantly in 2003 and immediately showed why it’s the star of the Big line. In addition to being an improvement over previous SSX games, SSX 3 was also one of the biggest hits of the year. Refined gameplay, revamped environments, THX-certified graphics and sound, and competitive online play (PS2 version) made certain of that. SSX 3 literally gave players a mountain of gameplay, as all the courses and events were based on one huge mountain. Simply put, SSX 3 reaffirmed Big’s dominance of snowboarding games, though the more realistic Amped 2 provided serious competition on the Xbox. 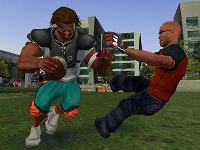 “Flash over fundamentals” nicely sums up NFL Street, a seven-on-seven football game that has more in common with Midway’s NFL Blitz franchise than EA Sports’ own Madden series. Essentially, the game’s developer, EA Tiburon, has taken the best elements of the NBA Street games (trick moves, Gamebreakers) and applied them to football. There are no helmets, coaches, or penalties here, only hard-hitting, show-stopping action. The game packs in more than 300 NFL stars, along with several unique environments in which to wreak havoc. PS2 owners have the extra advantage of taking their trash-talking online.

All in all, NFL Street should fit in nicely with the rest of the Big titles and maintain the high level of quality the brand has become known for. Meantime, rowdy hockey fans are anxiously awaiting a Street game to call their own…