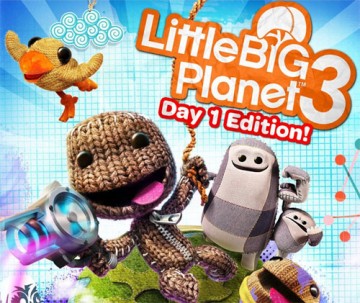 LBP3 pushes the limits of creativity even further with the most comprehensive Create toolset to date, allowing players to now make limitless levels with their very own game worlds and full-scale adventures. Anyone can become a video game designer with create-in-play tutorials that teach new users the accessibility of the expanding tool set. New PS4 system features such as the DUALSHOCK®4 Touchpad make the design experience even more user friendly and accessible for novice creators. On launch day, LBP3 owners will also have access to more than 9 million of the franchise’s User Generated Levels published to-date which provide an easy way to jump in on the fun. Sharing is built into the DNA of LBP, and the PS4 system gives the community an easy way to not only share their creations with everyone with just the press of the Share button but also add their own personal touch on how they share with the easy to use video editing application, ShareFactory. The broader gaming community can also interact with LBP3 in brand new ways on the PS4 system with the interactive livestreaming tool. Level creators can now set special events in their levels which livestream viewers can then interact with and trigger through the chat window on the PS4 system or a web browser. The power is in the hands of the community, meaning players can Share like never before, and the whole world can join in the fun.

“A series long renowned for defining the genre of community-based game design, LittleBigPlanet 3 continues to build upon its innovative design tools to give gamers something they never had before: the freedom to make any kind of game imaginable,” said Asad Qizilbash, Senior Director, First Party Games Marketing, Sony Computer Entertainment America LLC. “Supported by a community of creators millions strong, LittleBigPlanet 3 will continue to promote the values that have made the franchise a favorite over the past 6 years and make a great addition to the PS4 lineup this holiday.”

Utilizing the same tools included in the CREATE mode, LBP3 also includes a brand new playable storyline featuring Sackboy and three new playable heroes – Toggle, OddSock, and Swoop. As a showpiece of the full potential of the tool set, the group must restore balance to Bunkum, a creative paradise where abundant ideas drift through the sky. Each new character offers unique abilities and quirky personalities, from flying dare-devil Swoop, to speedy, wall-jumping Olympian OddSock, and dynamic Toggle with the ability to transform from the hefty, strong Big Toggle to the nimble, sneaky Little Toggle. With multiplayer support, players will be able to play cooperatively together with up to four players (local or online), to take on the nefarious Newton, the world’s most careless and foolish Creator, in an adventure so big it had to be little!

LBP3 is now available for $59.99 exclusively for the PS4 and PS3 systems both at retail and as a digital download from the PlayStation Store. LBP3 is rated “E” for Everyone with Comic Mischief, Mild Cartoon Violence, Tobacco Reference.  For more information about LBP 3, please visit http://www.playstation.com/en-us/games/littlebigplanet-3-ps4/.