BECOME A MASTER OF ORIGAMI (AND PLATFORMING) IN A TALE OF PAPER, A PS4 EXCLUSIVE RELEASING LATER THIS YEAR! 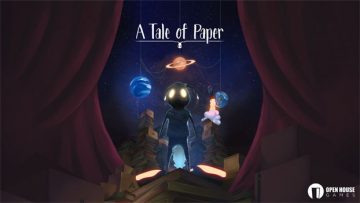 Sony Interactive Entertainment Spain (SIE Spain) is pleased to reveal a new gallery of screenshots of A Tale of Paper, the winner of the V PlayStation®Talents Awards, that will be released exclusively on PS4™ later this year. A Tale of Paper is an emotional adventure of a paper boy who will use origami to fulfill the dream of his creator.

Can a dream transcend its owner? Line is no ordinary hero: for a start, Line is a piece of paper. But it’s not a regular piece of paper either: it is able to transform itself into different shapes such as frogs, paper planes, rockets, or even birds. In this textless adventure, each of these shapes allows Line to navigate through the real world of A Tale of Paper in a magical perpsective in order to unveil its mysteries.

“A Tale of Paper’s slow-paced and deep gameplay is what makes it special”, explains the Open House Games team. “We mix puzzles and platforming but we also throw in some suspense and bits and pieces of walking simulation in this mix. It is also worth noting that this is no 2D platformer. The camera scrolls laterally, but players can roam in its world in any direction”.

Instead of power-ups, Line will use origami to overcome every obstacle on its way, even some evil Roombas: “Line must combine all of its abilities to clear every stage. But be careful, because every shape only allows Line to perform one action. As a frog, Line can jump higher but it can’t walk or run. We wanted to transmit Line’s fragility (and his potential to overcome obstacles) through this idea, combined with clever level design and some relentless enemies called Roombas”, explains the Open House Games Team.

Players can expect to play A Tale of Paper when this PS4™ exclusive releases later this year.

Airplane Mode is Ready for Takeoff October 15 on PC

Submerge into the Abyss on October 16th with Aquanox Deep Descent!