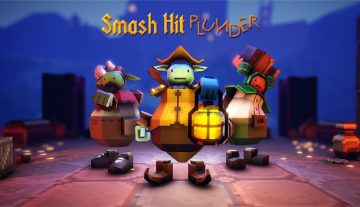 Players looking for a smashing-good time in PlayStation®VR can head to North American retail stores today to pick up Smash Hit Plunder. This is the first co-operative narrative campaign adventure game for PSVR and offers a truly physical VR experience, as players can throw, shake, eat, burn and generally annihilate everything in sight.

Set in the medieval and ghost-infested Castle Carvasso and its sprawling surroundings, Smash Hit Plunder players step into the boots of a young mage recently returned from magic school. While it initially seems the mage just inherited the dwelling of their dreams, the castle is magically locked up by a ghostly debt collector and it’s up to the player to wreak havoc throughout the grounds to find enough hidden treasure to pay off the debt and win back their home.

Smash Hit Plunder is available now for PlayStation®VR for $29.99 at North American retailers. The game has support for French, Spanish and English languages, and is rated E10+ by the ESRB.