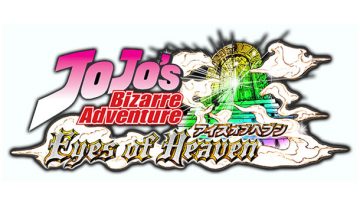 BANDAI NAMCO Entertainment America Inc., the premier publisher of anime video games today announced that JOJO’S BIZARRE ADVENTURE: EYES OF HEAVEN has officially launched in the Americas exclusively on the PlayStation®Network for the PlayStation®4 computer entertainment system. Players will have their turn at striking a pose while teaming up with friends in this ultra-stylish, two-versus-two, 3D action-brawler that features characters from each arc of the incredibly influential JoJo’s Bizarre Adventure anime and manga series.

“CyberConnect2 is famous for developing some of the best anime-based fighting game experiences in the world and JOJO’S BIZARRE ADVENTURE: EYES OF HEAVEN is the latest addition to its illustrious roster of great games.” said Eric Hartness Vice President of Marketing at BANDAI NAMCO Entertainment America Inc. “We’re eager to see fighting game fans in the Americas immerse themselves in the JoJo’s Bizarre Adventure universe and battle it out in the most over-the-top and stylish ways possible.”

Presenting a unique two-versus-two style of gameplay, players can select their team of combatants from over 50 different characters, each with unique signature attacks that fans of the JoJo’s Bizarre Adventure series know and love. Characters in JOJO’S BIZARRE ADVENTURE: EYES OF HEAVEN are classified by specialized fighting styles, giving clues to the type of attacks a character may deploy along with specific strategies players may use in the midst of battle. The fighting styles can include summoning a fighting spirit to battle alongside the player’s character, harnessing energy to perform powerful attacks, fighting on horseback, and more. Players with an understanding of how each character operates will be able to tactically fight alongside their partner as they stylishly lay waste to their opponents. Knowledge of each character’s fighting style is especially critical in the game’s four-player multiplayer mode that enables two teams to battle each other in online matches where communication and teamwork will be key factors to achieve victory.

JOJO’S BIZARRE ADVENTURE: EYES OF HEAVEN is rated “T” for TEEN by the ESRB. The game is available digitally now in the Americas exclusively on the PlayStation Network at a MSRP of $59.99 for the PlayStation 4 computer entertainment system (prices may vary for other countries in the Americas). For more information about JOJO’S BIZARRE ADVENTURE: EYES OF HEAVEN or other games from BANDAI NAMCO Entertainment America Inc. please visit; http://www.bandainamcoent.com, or join the conversation on our Facebook page at https://www.facebook.com/BandaiNamcoUS/ or on Twitter at http://www.twitter.com/bandainamcous.