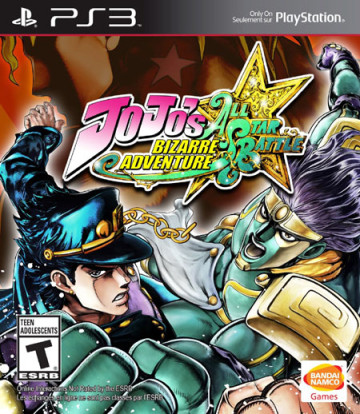 Leading video game publisher and developer BANDAI NAMCO Games America Inc. today released JoJo’s Bizarre Adventure: All-Star Battle for the PlayStation®3 computer entertainment system digitally via the PlayStation®Network and through retail exclusively at Amazon.com and ClubNamco.com in the United States.  Adapted from Hirohiko Araki’s smash manga hit, JoJo’s Bizarre Adventure, the game takes characters spanning all eight incredible story arcs of the manga and pits them against each other in an epic one-on-one fighting game.

JoJo’s Bizarre Adventure: All-Star Battle is developed by CyberConnect2, best known for their hit NARUTO SHIPPUDEN™: Ultimate Ninja® series of games and has been widely praised for delivering an authentic and high quality anime experience to video games.  The studio now sets its sights to bring the artistic vision and style of the JoJo’s Bizarre Adventure manga straight from the page to TV screens.  With a revolutionary proprietary graphics shader system, JoJo’s Bizarre Adventure: All-Star Battle gives players the feeling that they are participating in vivid and colorful battles straight from the pages of the manga.  Players will be able to choose from an impressive cast of characters spanning the entire series.  Each character comes with their signature moves punctuated by dynamic camera angles to capture every highlight of these dramatic fights.

Written and illustrated by Hirohiko Araki, JoJo’s Bizarre Adventure has been in publication since it was first serialized in Japan’s Weekly Shonen Jump in 1987 and has since sold over 70 million copies of the manga.  Known around the world by its hardcore fans with its off-the-wall style and distinctive characters, the series has inspired countless anime and manga franchises since its debut over 25 years ago.  The story of JoJo’s Bizarre Adventure follows the misadventures of the Joestars, a powerful English family with each member having a distinctive star shaped birthmark above their left shoulder blade.  The series spans several generations of the Joestar family with each part focusing on a different descendant of the Joestars as the main protagonist alongside a colorful cast of supporting characters.

JoJo’s Bizarre Adventure: All-Star Battle is rated “T” for Teen and carries a MSRP of $49.99.