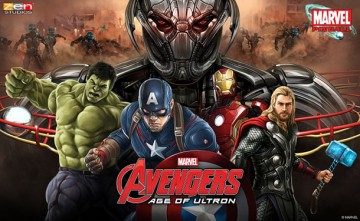 Zen Studios, a maker of hit digital games including Pinball FX2 and Zen Pinball 2, has revealed their latest table inspired by the Marvel’s Avengers: Age of Ultron film. The Marvel’s Avengers: Age of Ultron pinball table will bring the blockbuster action of the upcoming film to Zen’s pinball universe on PC, consoles, and mobile platforms including Zen Pinball 2, Pinball FX2, and Marvel Pinball starting on April 21, 2015.

The Marvel’s Avengers: Age of Ultron table will allow players to relive the struggle of Earth’s mightiest heroes, including Captain America, Iron Man, Thor, The Incredible Hulk, Black Widow, and Hawkeye against Ultron and his seemingly endless army. The table features dedicated game modes for each member of the Avengers team, including a first-person sharpshooting mini-game starring Hawkeye, a spectacular aerial melee combat sequence between Iron Man and Ultron, and selectable difficulty levels to cater to each player’s individual skill level.