A View to Frag

A View to Frag

The Physics of Frag: Evolution and the First Person Shooter

Recently, during an enjoyable match of Quake III I found myself reminiscing over the great leaps and bounds that first-person shooters have made since their inception. Like many of you, I found myself sucked into the unexplainably addictive vortex of ID’s little baby, Doom and since that time have always given a friendly nod to highly anticipated first-person shooters. Whether I was wielding a lightsaber on some hostile planet or leading a charge on the beaches of Normandy there always seemed to be a time and place that was perfectly suited for a W-A-S-D driven adventure.

Now however, as I replayed some of the most classic Quake moments on my PC and mused about the forthcoming Doom III, it suddenly occurred to me that shooters have evolved in such a linear fashion that there must inevitably be a curve somewhere along their development line. In other words, at some point in time the evolution of the first-person shooter will double back upon itself, or curve inward like a wicked turn at Daytona. There’s probably a law of physics in some thick dusty textbook somewhere that validates this principal and I’m sure if I tried hard enough I could find a dateless wunderkind in a white lab coat and glasses to back me up. But in lieu of that, think of it this way:

Shooters and their components exist in a vacuum where their rate of development has raced along at an unbelievable rate of speed. We’ve gone from the original Wolfenstein to NOLF 2 in no time flat, from small pistols to huge BFG’s in single bounds and have taken zombies, imps, and floating pumpkin heads about as far as any Pepsi-induced nightmare can take them. All of this mass floating around in our hypothetical vacuum has generated a huge amount of frictional heat, causing displacement and disproportionate reproductive activity, which explains why ID hasn’t innovated a single game that plays any differently from Doom since the early 90’s and why every other software company has yet to stop copying them.

Now, there’s a tremendous amount of movement occurring within a confined space, and yet there is no real means of solid containment for all the many bullets that are being fired at assassins, nazi’s, zombies, nazi-zombie’s ninja’s and other first-person shooter faire, creating perforations that induce an influx of hot air and allow for the entry of overly hyped specimens such as Daikatana. When our frictional heat is combined with the influx of hot air, the lack of any balancing substance to act as a cooling agent causes the development curve to bend and possibly even warp, much like the mind of a master criminal or a U.S. Senator. Keeping this principle in mind, which I proudly dub Frag Physics, I have been able to mathematically deduce the next step in evolution for the next generation of 1st person shooters. Observe: 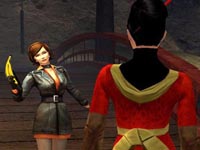 Due to the high influx of gadgetry in No One Lives Forever 2, NOLF 3 has been granted exclusive use of the banana as Cate Archer’s crime fighting weapon of choice. Players will enjoy unlimited access to bananas of all types, including stealth bananas, ninja-star bananas, head lopping sword-bananas, automatic tommy-bananas and the all-powerful nuclear-banana. The color of choice for all these weapons of mayhem? Word on the street is…yellow. 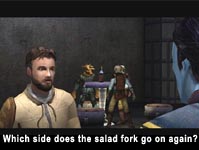 Following a massive outcry from outraged parents of children who purchased Jedi Knight III: Jedi Academy, George Lucas has pledged to completely revamp the storyline of JK IV. Responding to complaints of excessive phallic imagery promoted by the lightsaber, JK IV will feature Kyle Katarn as a Master of the Forks, teaching wayward stormtroopers the proper etiquette and protocol required for fine dining, dancing or blowing away fuzzy ewok-muppets with their blaster rifles. 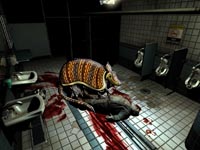 The long anticipated third sequel to the king of first person shooters suffered a setback recently when an unofficial ‘demo’ was leaked out on the Internet. Faced with the prospect of giving away all the secrets of Doom III’s predictable gameplay, ID founder John Carmack announced today that everything about Doom III, ‘will be revamped and restructured so that everyone who buys this game will be completely surprised. No one is going to frag space zombies in Trilinear filtering until I say so, dangit.’ The venerable space marine will now be replaced by a wisecracking yet lovable armadillo who is fluent in six languages and versed in all forms of tae-kwon do. The Armadillo will use his knowledge of ant-killing and sunning atop craggy rocks to survive in a space station gone mad after a haywire experiment. No word yet on whether the imps will be replaced by kangaroos.

Following the popular resurrection of Counter-Strike by lonely men who enjoy yelling profanities at one another over their voice-communication headsets, game accessories maker, On-Target has announced a new special headset that will be produced in cooperation with CS creator’s Cliffyb and Gooseman, exclusively for use with Counter Strike 2. “After the first month of Counter-Strike’s release, we realized that the only reason anyone was even logging on was to shout %$# curses at one another,” says Gooseman. “So we approached On-Target with the idea of making ‘The Jolly Germinator’ a voice communication headset that allows players to learn new expletives while they cuss out their fellow Counter-Strike players.

People from around the globe will now be able to store and categorize all of the cuss-words they hear online, from the foul guttural slang of cockney London to the unpronounceable drunken slurs of Madagascar pirates. Players of Counter-Strike 2 however may be disappointed to learn that there will be no new guns, team-coordination or even maps in CS 2. “No one really cares about the #$% gameplay anyway, they just want to curse, so why bother making a new #$%&* game,” says Cliffyb. Additional options for the Jolly Germinator will include a Pamela Lee voice enhancement and Darth Vader breathing sounds. “People just love that heavy breathing #$%*,” says Gooseman.

As you can see, science has once again proved that despite all evidence to the contrary, the growth and innovation that has marked the evolution of the first-person shooter will continue to advance – even if it has to start standing on its head and holding its breath. Tune in next time when I apply the Physics of Frag and the idea of the gaming nucleus to Will Wright’s Franchise in “The Sims – Simulating Life So You Don’t Have To.”