A Retro Nip and Tuck

A Retro Nip and Tuck

These day, it seems like plastic surgery and cosmetic enhancement are all the rage. Living in Southern California we are constantly surrounded by the familiar sights and sounds of tummy tucks, lip injections, collagen implants, liposuction and every other manner of physical alteration dreamed of by man. No longer limited to just a feminine audience, cosmetic surgery is becoming quite popular amongst men, teenagers and little Chihuahuas named Pepe. Now some may argue against it, and others may not think it’s natural, but plastic surgery can certainly enhance one’s appearance, and if Pamela Anderson is any yardstick to measure by, most don’t seem to be complaining. But did you know that even your favorite games have become the latest segment of society to fall for the plastic surgery craze? It’s true.

Recently, as I was going over the list of games that have gone gold and those that are ready to hit retail shelves in the near future, I came across a group of names that I hadn’t seen since my halycon gaming days with the Super Nintendo, Pentium II and the venerable Commodore 64. Teenage Mutant Ninja Turtles, Lords of the Realm III, Robin Hood: Defender of the Crown, and Tortuga: Pirates of the New World are all slated for imminent release on the next generation of console and pc-gaming platforms.

I had to blink and reread the list twice. Were my eyes deceiving me? For a moment, I had to resist the urge to grab my baseball cards and play AYSO soccer, but when I calmed down I verified the truth with my own eyes: some of the most popular and beloved classics are coming back; bigger, bolder and –with the help of a little digital cosmetic work – more beautiful than ever.

It makes sense. After all, in the gaming industry nothing is more beloved by publishers than a household name with franchise appeal. In an era when sequels have become de rigeur for even mildly successful games the demand for revived classics in today’s graphical fit and finish has grown stronger, propelled by the twin engines of nostalgia and superlative success. The gaming industry is all grown up. In what was once a garage programmer and bedroom powered industry that catered to a severely restricted niche market now is one of the most profitable and fastest growing markets today. According to a recent Wall Street Journal news report, the gaming industry’s profits exceeded 27 Billion last year, outstripping movies’ gross domestic earnings and closing in fast on music sales.

With money comes power, and with power comes a lot of leverage to provide a vacation down memory lane with some of the most well known and beloved classics in the gaming world. With time comes change though, and even a game as finely aged as the most luscious Bordeaux vintage can’t really hope to compete with the eye candy offered by today’s top triple A titles. Gamers still want to re experience the classics, but nobody wants to type in “Cross Bridge. Get Axe” while staring at a monochrome palette of 16 different kinds of gray. The answer? A digital facelift, plastic surgery to transform all of yesterday’s classics into today’s greatest hits, all over again. Let’s take a look at some of the most recent beloved oldies to funnel down the development pipe and find out what they’ve done to get back in shape for the next era of interactive gaming.

Teenage Mutant Ninja Turtles
Pilates. Pilates. Pilates. Word on the street has it that after the collapse of the once phenomenally successful Turtles franchise in the late 80’s, Leonardo, the fab four’s Katana wielding frontman and charismatic spokesman took the group on a far eastern retreat to the misty mountains of Tibet, where they learned the ages old arts of Meditation, Yoga and Qi-gong. The inner spiritual journey taken by Leonardo, Donatello, Raphael and Michelangelo enabled them to re prioritize the importance of those things that truly mattered in their lives, like living in sewers and hitting on female news reporters in yellow jumpers. Upon their return from the far east the Turtles renegotiated their contract with Konami to star in several new games based upon the original series. 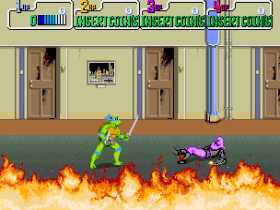 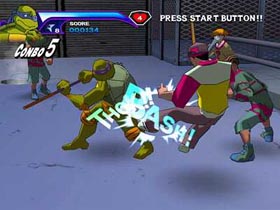 Sadly however, renowned rodent Master Splinter will not be joining the Turtles this time around, as his furry corpse was consumed by his students back in Tibet. “Hey what’s a turtle to do?” said Michelangelo, “There are no Pizza Hut’s up there anywhere, and we got majorly hungry. Cowabunga!” This season the Turtles are coming back in an all new rock ‘em sock ‘em action game akin to their Arcade and Super Nintendo smash hit, Teenage Mutant Ninja Turtles and TNMT: Turtles in Time. Word on the street is that the reptilian foursome underwent some major cosmetic surgery, ditching their old sprite and pixel digs for for a cel shaded look that’s all the rage this year. Additional rumors have it that they used the same doctor who handled Ubisoft action game XIII’s new look.

Lords of the Realm III
It’s all about the 3d. When Lords of the Realm II was released to critical acclaim it established once and for all the legitimacy of hybrid platform games. Here at last was a game that combined the excitement of real time strategy castle sieges with the thoughtful and in-depth content of a turn based adventure series. This time around however, as the third iteration of the series gears up to go medieval on the gaming world the developers at Sierra decided to ditch the Dark Age 2d look and present Lords III in glorious 3d. 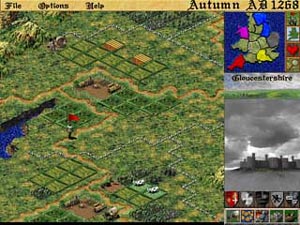 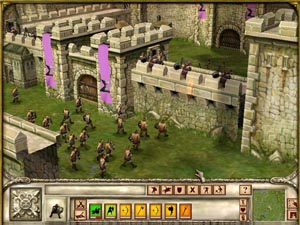 Developer David “Zeb” Cook gave Game Chronicles the inside scoop on Lords of the Realm III’s new aesthetics. “At first we weren’t sure just how to make Lords III stand out visually. The old 2d graphics served Lords II well, but to be competitive with today’s games we knew a major graphical overhaul would be in order.” Realizing that pouring boiling hot oil on top of castle invaders just wouldn’t be fun without good graphics, Cook turned to the team at Blizzard, who had just updated their real time strategy classic Warcraft III with a brand new 3d look.

“It took some tough negotiating at first, but when we offered Blizzard officially licensed Panda Brewermeister plush toys for their entire staff they gave in and referred us to the artist who did Arthas and Jaina’s makeup.” Sierra Games, Lords of the Realm III’s publisher, wanted to announce that any similarities between bow legged fuedel lords with cockney accents and green skinned monsters shouting “Zug Zug” are completely coincidental.

Robin Hood: Defender of the Crown
What a difference a decade makes. When Kellyn Beck’s medieval masterpiece first made it’s debut it promised “heart pounding action”, “majestic tournaments” and a “unique blend of of role-playing and strategy combined with dazzling arcade style sequences”. And boy did it deliver. Utilizing state of the art 1986 technology Cinemaware presented a middle ages saga full of intrigue, adventure and romance. Not only that, but you could play with just a mouse. No typing required! 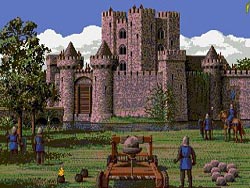 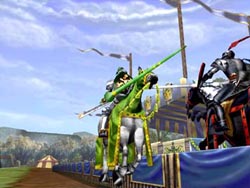 Today however, it’s safe to say that cutting edge graphics circa 1986 and the ability to use your mouse to interact with a game isn’t going to wow to many folks, with the exception of your pet rock and grandma. In order to put that bump mapped sparkle back in Robin Hood’s eye Cinemaware turned to its own in-house crew of effects wizards and digital surgeons. “The important thing this time around was to make Maid Marion as physically attractive as possible, within the limits of constrictive Christian doctrine circa 1254 AD,” said Defender of the Crown program lead Little John of P-4 Canterwood Forest. “After consulting religious texts from that era we discovered that it meant keeping Marion wrapped up in a nun’s habit from head to foot. Since we really didn’t want an anti-Lara Croft icon on our hands serving as an inspiration to prudish female video game fans, all two of them, we decided to balance her look, giving her the clothing and hairstyle of the times, but still retaining a Baldur’s Gate II female tavern keeper look.” Rumor mongers from around the gaming kingdom speculate that Maid Marion’s bust will be covered by a large white poster sign with the words, “Can you tell a bunch of lonely male programmers made this?” painted on the front.

Tortuga: Pirates of the New World
Surgery? We don’t need no stinking Surgery!

Last but not least we come to the buccaneers of the gaming world, Askaron studios, whose Tortuga: Pirates of the New World aims to recapture the excitement and adventure of Sid Meier’s swashbuckling classic Pirates! Although Tortuga isn’t technically a 100% carbon copy updated remake of the original 1987 Pirates! Askaron was determined that their digital excursion into the briny waters of the Caribbean not suffer from the ill effects of scurvy textures or gangrenous graphics. As a result Tortuga underwent full body treatment, having digitally enhancing work done on all parts of the game from head to foot. 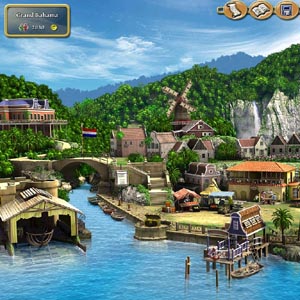 “The aim this time around was to wait right until we saw the whites of player’s eyes, and then hit ‘em with a full broadside of color drenched visuals as sharp as the point of me cutlass,” said development head Long John Silver. Silver went on to affirm that players would be quite pleased at the outcome of Tortuga’s graphical updates. 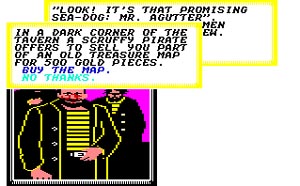 “Sixteen men on a dead man’s chest has never looked better, I assure ye, unless ye be chuggin down a bottle ‘o rum at the same time,” commented Silver. While players may be disappointed not to see Bethesdas’ Pirates of the Caribbean stars Captain Jack Sparrow and William ‘Bootstrap’ Turner make a cameo rumor has it that players would be even sorrier had they played the actual Bethesda game. No word from Sid Meier yet on whether this digitally enhanced adventure is up to snuff. With all the latest and greatest eye candy a cyber-privateer could ask for however you can bet this is one ship that’s ready to set sail into stores near you – Avast!